After overhearing about the investor’s plan, Grant Ryan sets a trap for developer Andre Donovan to pick him off.

The trap? Grant waits on all fours in a jock hoping Andre will take the bait.

Without a doubt, Andre falls for it and can’t believe what he’s seeing before diving in face first to rim Grant’s hole.

Andre teases with a couple of fingers before noticing Grant wants more and slides his giant bare cock in Grant’s hole.

With Grant’s hole clenching his cock, Andre pulls out and face fucks Grant, ass-to-mouth, before lying beside him and fucking his hole some more.

They take a quick break so Andre can slurp on Grant’s dick before climbing on top of Andre and riding him down to the base.

Faster than Andre can put his clothes on, Grant delivers a sneak attack and ties Andre up. Has Grant’s plan to thwart the developer’s work?Join them! 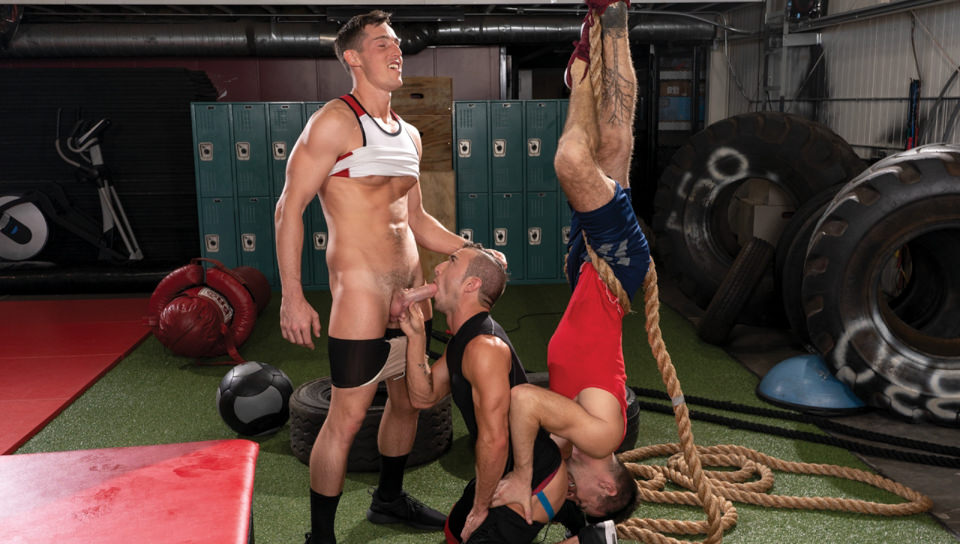 Grant Ryan, Woody Fox and Steven Lee are all working out separately at the gym. When Woody gets upside down on a rope and drops his phone, Steven helps him out and hands it back to him. Woody thanks Steven with a kiss that catches Grant’s attention.

Eager to join the action next to him, Grant jumps in to start sucking Steven’s raging hard-on. The three studs take turns kissing and sucking cock until Grant hops on top of Woody to get his ass eaten while he sucks two dicks at the same time.

Steven kicks it up a notch when he gets behind Grant and slips his thick pole deep into Grant’s hole. Woody has a front row seat with his face positioned under the action so that he can eat Steven’s ass while the stud continues fucking Grant.

Woody wants his turn with Grant, and the studs change it up again to spit-roast Grant with Steven plugging his face with cock and Woody fucking him from behind. Woody and Steven keep pounding away on Grant’s holes until they’re ready to blow their loads.

Grant Ryan can’t help but notice that JJ Knight is working out with a massive boner. Grant needs a spot and recruits JJ to help him lift. With every squat that Grant does, JJ’s massive cock rubs against Grant’s ass.

JJ can see that Grant is ready for some cardio and helps the stud out of his shorts. Grant doesn’t waste a second getting JJ’s hard cock all the way down his throat and works it over until JJ is throbbing and ready for more.

JJ bends Grant over on the mat and rims his ass until the stud is opened up and begging for JJ to be inside him. JJ gives Grant what he desires and slips his thick dick deep into Grant’s eager hole.

He pounds away as Grant demands JJ go deeper and harder. Grant loves riding a nice dick and rolls JJ over onto his back. Grant straddles him and rides the thick dick in and out of his tight, warm hole.

He keeps riding up and down until he dumps his load all over JJ’s tight, hard abs. When JJ sees the mess that Grant has made, he pulls out and points his dick at Grant’s face.

It’s a gigantic load that never seems to stop as JJ moans out in ecstasy while Grant laps up what lands on his face….Join them!

Bearded businessman Grant Ryan has a sexy young blonde assistant, Theo Brady whose job is not just to keep track of his upcoming appointments, but to help Grant’s keep his stress levels low.

When burning some sage isn’t enough to calm Grant’s blowup, Theo gets naked and tells Grant to work out his stress on his hole.

Grant rims the helpful twink, then fucks his mouth as Theo lies across the counter.

Grant fucks the bottom doggy style, and the guys 69 on the counter.

The only blowing up around here now is Theo blowing his boss and taking a facial.Join them!

The doctors are finally off work, and it’s time to blow a little steam, and practice some stress relief.

Chiseled, good-looking Diego Sans and hunky, muscular Grant Ryan get things started by stripping each other naked, and making out.

They waste no time stripping out of their leather driving gear, and sucking each other off. Chiseled Vadim gets all up in Grant’s tight hole, and rims him wide open so he can drive his big, thick cock deep into his bottom….Join them!