With his boyfriend studying downstairs, Paul Canon and contractor Mike Stone make their way towards the guest bathroom to discuss potential alterations to some of the fixtures, but on the way up the stairs, Paul boldly decides he’d rather do a different kind of pipe cleaning, as he throws Mike up against the wall and whips out his cock.

Mike is down to get dirty, but he’s worried Paul’s boyfriend might hear them. This doesn’t deter Paul, who begins sucking Mike’s cock until he’s rock hard and ready to fuck.

Throwing Paul up against the wall and cupping his mouth to keep him quiet, Mike plunges his raw cock deep inside Paul’s hole, fucking him doggy style as the boyfriend thinks he hears something a room away.

He makes his way to the stairwell just as Mike and Paul move up one floor higher, and Paul mounts Mike reverse, bouncing on his pipe as he strokes his own dick hard.

They duck into the bathroom and get dressed in a hurry so as not to get caught…Join them! 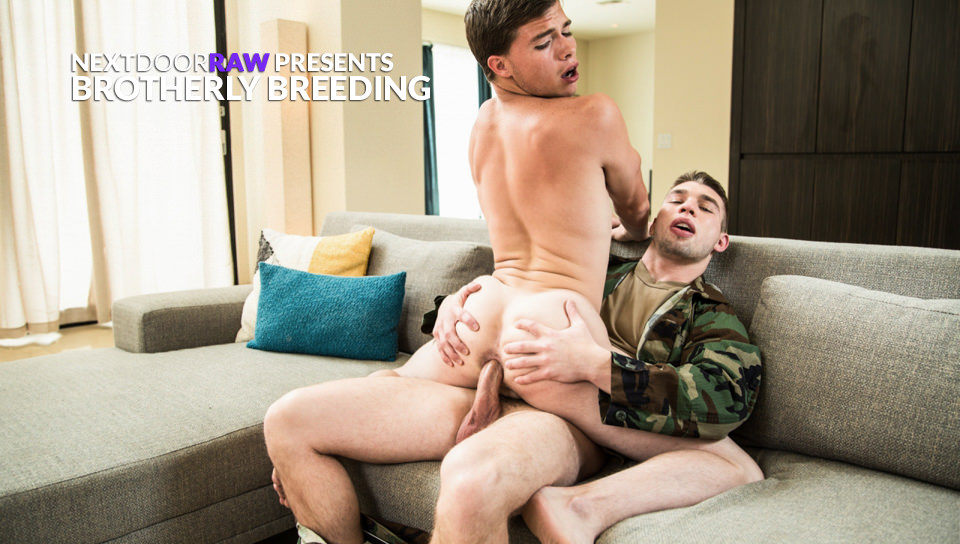 Taking advantage of a surprise break in deployment, soldier Mike Stone wants to surprise his step-brother Dakota Young with his arrival. With step-father off on errands, Mike creeps through the back door and pounces on Dakota in the kitchen.

Dakota is shocked to see Mike but quickly elated to be reunited with his step-brother. When Mike asks Dakota if he missed him, Dakota nods, and tells him he wants to show him just how much, as they embrace and make their way over to the sofa.

Mike keeps pounding away, pulling out to blast Dakota’s hole with is long overdue load, before plugging his cock back inside and breeding his brother’s hole, good and proper. With every thrust, Dakota realizes just how much family means to him…Join them!