Kaden Alexander in his own words: “I support myself, which is tough. So I am hoping doing this can help me get on my feet again.”

BSB comments: “Kaden Alexander is full of energy, and he sure does make everyone feel comfortable around him. Talk about life of the party!”

This is Antonio Ferrari’s second time back to the studio and Kaden Alexander makes sure he gets a very warm welcome as these guys start making out. The more they kiss, the more eager Kaden is to get to Antonio’s cock as he gets him on the bed and takes that dick in his mouth.

Kaden deep throats Antonio, sucking his balls and pulling on his shaft with his hand as Antonio watches him go down on him. Antonio gets his mouth filled with Kaden’s huge prick next, working that sweet cock until it’s hard as fuck and then lying back and inviting Kaden to sit on his dick.

Kaden lowers his ass onto Antonio’s shaft, riding it reverse cowboy and shaking his ass as Antonio grips Kaden’s sides as he fucks him raw. Kaden lies with his face down on the bed next, getting pounded hard from behind as Antonio drives that cock deep inside him and Kaden moans as his ass gets filled with Antonio’s meat.

Kaden Alexander uses his charm and laid-back attitude to put one of the newbies, Chaz Berling, at ease before beginning their scene. But a few jokes and some small talk and these guys are getting right to it, making out with each other as they lose their clothes piece by piece until Chaz is naked on the bed.

Kaden takes Chaz’s dick in his mouth and works that cock, sucking it and making Chaz moan before they switch off and Kaden lets Chaz get a taste of his juicy meat. Chaz works Kaden’s cock with his mouth and hand and when they both lie down on the bed they have some fun 69ing before Kaden’s ready to take it up a notch.

As Kayden Alexander sleeps, his boyfriend Pierce Hartman sets up the perfect morning wake up. Inching his way down Kayden’s muscular back, Pierce kisses his to Kayden’s underwear, slipping them off as he slides his tongue deep into Kayden’s unsuspecting hole.

Kayden begins to stir and wake up a bit, discovers Pierce is already wide awake, and slowly comes to with a giant smile on his face, rolling his lover over and sucking on Pierce’s hard cock. Pierce loves the reciprocated attention but what he really wants is for Kayden to fuck him hard with that morining wood he’s sporting.

Wishing to oblige, Kayden bends Pierce over doggy style and proceeds to fuck him hard from behind, pushing every inch deep inside of Pierce and making him take it. Pierce can’t get enough of Kayden’s cock, even when Kayden turns him over and pile drives him from above.

And as Kayden pulls out and blasts Pierce with his load, Pierce is sure that there’s just no way for him to get enough of Kayden’s cock in one sitting. Luckily for him, there’s always tomorrow morning…Join them! 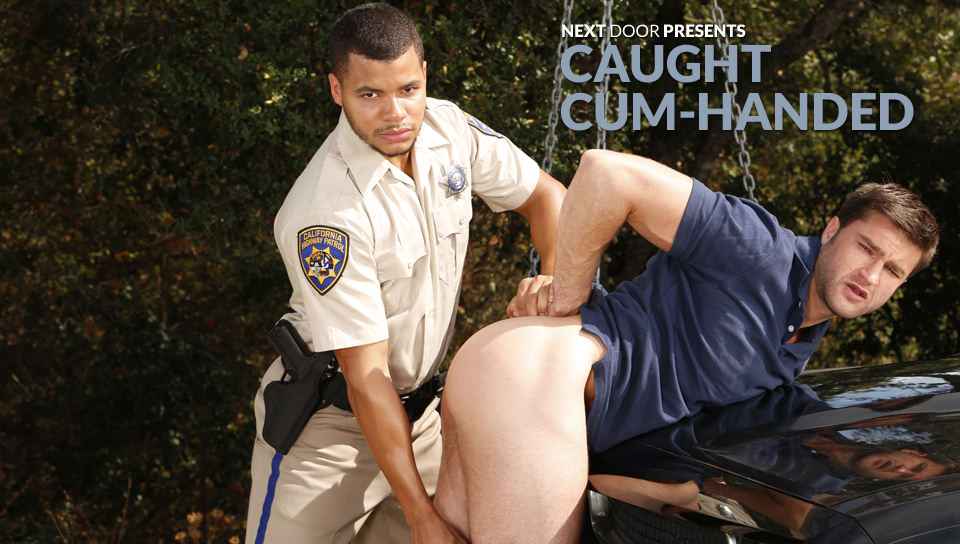 Such is the case as Officer Alexander happens upon Abel Archer pulled over on the side of the road. As he approaches the vehicle, Kaden sees that Abel is taking a little personal break, indulging in a bit of me time, and is more than a little flustered when Officer Kaden knocks on his window.

Abel, knowing he’s been caught red handed (literally) scrambles around to get himself out of trouble, offering to take care of the officer in exchange for some lenience. Officer Kaden, usually above a bribe, takes a long look at what Abel is packing and decides this might be an offer worth taking up, so the two of them move to a more private location and Abel immediately begins sucking off the cop.

Kaden returns the favor but decides if he’s going to forgive Abel’s transgression, then Kaden’s gonna need to get his dick wet, so he bends Abel over his car and proceeds to pound his delinquent ass in the hot sun.